Smartphone Technology In Your Irvine Kitchen? 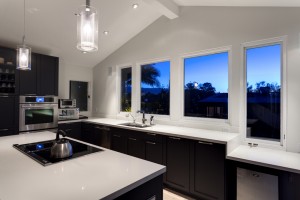 Smartphone Technology In Your Irvine Kitchen?

It’s just a matter of time when home buyers will walk into a kitchen in an Irvine home for sale asking if the kitchen has smartphone technology?

With the spike in the popularity of smartphone technology, Irvine home buyers have higher expectations for all the machines in their lives, including kitchen appliances in their Irvine home. While our kitchens in Irvine homes might not look like something from the Jetsons cartoons anytime soon, kitchen appliances are getting techno-smarter each year. For example, a Siemens refrigerator (currently in the concept stage) may one day eliminate the need to call home and ask, “Do we need milk?” The new model comes equipped with Wi-Fi and multiple cameras mounted inside it which will allow people to use a smartphone app to visually scan their refrigerator shelves, even while they’re standing in the dairy aisle at a grocery store across town.

New appliances are also smart enough to save a few bucks in your Irvine home. Whirlpool has developed a new line of appliances called 6th Sense Live, and they’re designed to run when energy prices are lowest. Using a Wi-Fi connection, a dishwasher could start its own cycle at whatever point in the day it determines that energy prices are lowest. (It does this by using a constantly updated database of real-time energy prices.) Appliances that break down have been a source of frustration and unexpected expense for homeowners, but today’s new smart appliances may have a solution even when things go wrong. LG has developed appliances with remote diagnostic services. It’s called “Smart Diagnosis,” and it works by allowing the broken appliance to “talk” to a smartphone app by playing a certain sound. The app can “decode” the tone it hears and give the owner instructions on what to do next. If the repair is simple, the app might send a text message to let the owner know it’s time for a new water filter for the fridge. For more complex issues, the app will automatically request a service call.

Irvine kitchens aren’t the only room of the house where smartphone technology reigns supreme. Laundry rooms are also being revolutionized by the technological wave. GE has a dryer that automatically gets messages from the washer about the load it will soon receive. By customizing the cycle, clothes aren’t as likely to overdry. For now, the bells and whistles of smart appliances are still a novelty. Customers aren’t rushing into big box stores demanding appliances that can talk to the outside world via Wi-Fi. But most manufacturers are preparing for the trend. Samsung and LG, both based in South Korea, are on the leading edge of smart appliances. Samsung is best known for its high-tech refrigerators that feature a touch-screen. Wolf and Sub-Zero both have a few appliance models capable of communicating with smartphones. But some manufacturers, like Bosch, are holding Sense Live, and they’re designed to run when energy off until the appliance industry institutes a standard way for all smart appliances to communicate.

Last year, sales of smart appliances were only about $613 million, a low number according to a Pike Research report. But executives like Bob Baird, vice president of merchandising for Home Depot, was quoted in a report on Reviewed.com saying that, in time, more and more customers will request these types of machines, adding “It’s going to happen.”

This site uses Akismet to reduce spam. Learn how your comment data is processed.